Iconic shirts up for grabs courtesy of Hawks Legend

Two of the most famous shirts of Whitehawk Football Club’s most memorable seasons are up for grabs, as the club continues to raise funds for the highly successful #SHOUTOUT For Mental Health Campaign. 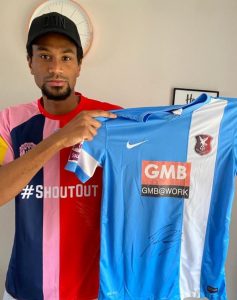 One shirt is from The Hawk’s Ryman Premier League 2012/13 promotion season, and the second one is the shirt from the first ever season in the National League south/Conference south in ’13/14.

Both shirts have been signed by Danny. Tickets are just £5 and to enter CLICK HERE

Winners will be announced next Wednesday (March 31). Proceeds will be split 50/50 to the #Shoutout campaign, and The Hawks pre-season rebuilding campaign.

The #Shoutout For Mental Health campaign was a month long series of on-line events, with Whitehawk Football Club and Dulwich Hamlet Football Club combining to raise funds for their local MIND charities. the campaign has raised over £2,500 so far.