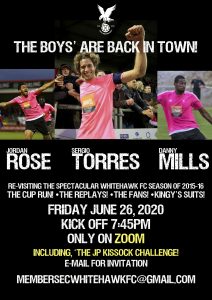 The evening will also feature current Hawks player-assistant Manager JP Kissock, who has agreed to take part in a ‘fans challenge’ to raise money for the club.

The 2015-16 team, managed by Steve King, were minutes from a lucrative 3rd round FA Cup tie away at Everton’s Goodison Park, but narrowly missed out to a late Dagenham & Redbridge winner at the Enclosed Ground, in front of a record crowd and millions of TV viewers.

The team had to play six matches to get to the second round replay and once the BBC TV cameras picked up the tournament from the first round, the nation started to follow the Hawks progress, and Steve King’s sharp suits.

Hawks Members Secretary Simon said: “It’s going to be a great night and I’d like to thank the boys for giving up their time to do this.”

He added, “ It just shows that throughout a player’s career, there are times when it all comes together. That FA Cup run has gone down in our history. In our 75th anniversary season, we couldn’t have wished for a better event at this time!”

The event is by invitation only and you can request an invite ‘pass’ by e-mailing Simon at membersecwhitehawkfc@gmail.com