Just after lockdown, in late March, Whitehawk Football Club played out a thrilling 6-6 draw against fellow Isthmian League south east side Guernsey on twitter, creating a much needed respite from the changes that were being implemented.

The two clubs set up a Just Giving site, and both sets of fans raised an incredible £2,000, split between the two club’s nominated causes. Guernsey chose The Island’s Mind Charity, the Hawks The Whitehawk Foodbank,

After keeping the site open for a few weeks, The £1,000 was handed over to the Foodbank organisers recently.

Sean Avard, Operations Manager at the Whitehawk Foodbank, has been overwhelmed by the response:  “Thank you Hawks fans for your tremendous generosity raising £1,000 for the Whitehawk foodbank, it is so appreciated.”

He added; “Since the lockdown there has been a 600% increase in demand for food. That’s feeding around 500 people every week. We so appreciate your support and thanks again. “ 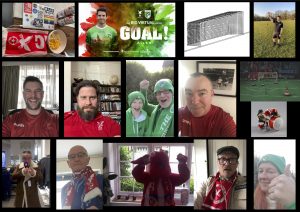 Hawks Head of Commercial & Marketing Kevin Miller said; “When we wrote the script with Guernsey it was just a bit of fun, and we had no idea that the response would be so positive. We initially set a fund limit of £500, thinking that with so much anxiety and change going on in the early days of lockdown, people would be unsure about their own situations. When we’d reached £900 even before the game started, we were ourselves overwhelmed by the generosity of both sets of fans”

He added: “What it shows is that even in times of crisis, grassroots football is a family, and families help each other in times of need. We look forward to meeting up with the Guernsey fans again next season to thank them personally, and as for Hawks fans… Everyone at the club is immensely proud of their generosity, and for everything they do to present a positive, inclusive community spirit, that we all aspire to.”

Whitehawk Football Club has teamed up with Donate A Ticket, so that fans can donate the price of a ticket to help their local club. Over 110 clubs around the UK have joined the scheme.

If you would like to donate the price of a ticket to Whitehawk Football Club then click on the logo, and thank you!