Whitehawk Football Club is proud to announce that Dr. Sophie Cook, the club’s Equalities and Diversity Officer and Player/Manager of Rainbow Rovers, Whitehawk’s LGBTQ+ team, has been awarded the ‘Outstanding Contribution To LGBT+ Life’ Award, at the prestigious British LGBT Awards, announced this evening at an on-line ceremony hosted by Strictly Come Dancing and This Morning host Rylan Clark-Neal.

The first official British LGBT Awards event launched in 2015 and recognise the amazing role models and organisations who are working tirelessly to better the needs of LGBT+ people. The awards have recognised famous faces such as Stephen Fry, Caitlyn Jenner, Tom Daley, Cynthia Nixon and Courtney Act.

Sophie has been a Hawks regular for many years, and in 2019 launched Football United in partnership with the club, and became player/manager of, Rainbow Rovers, one of the first mixed gender football teams in the country. The first Football United event saw the ‘Rovers beat an ex-Premier League all-star team 4-2, and both Football United and Rainbow Rovers were born!

Sophie is one of the most prominent transgender writers and broadcasters in the country, and was the first transgender woman to work in football’s Premier League as club photographer for AFC Bournemouth following her transition from Steve to Sophie in the summer of 2015.

This year she took the role of Whitehawk FC’s first Equalities and Diversity Officer, and her positive motivational spirit is taking the club’s message of inclusion around the region and now, around the country! 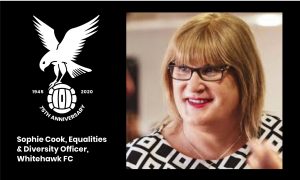 “We are all immensely proud of Sophie and her achievement in winning this incredible accolade. She is a huge Hawks fan, has been instrumental in setting up Rainbow Rovers, and has lots of ideas for making the club even more inclusive. Congratulations from everyone connected with Whitehawk Football Club!”

In accepting her award Sophie said:

“This award wouldn’t have been possible without the help and support of everyone at Whitehawk Football Club and Rainbow Rovers FC! Thanks guys, never stop fighting for what’s right!” 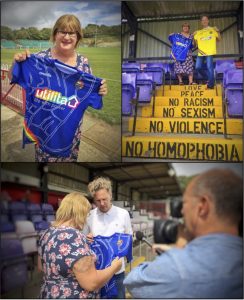