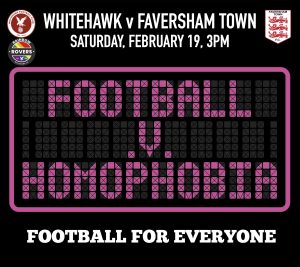 The annual Football v Homophobia initiative – taking place across the country, asks clubs, fans, players, football authorities and other supporters to focus their efforts, to tackle homophobia and prejudice against Lesbian, Gay, Bisexual and Transgender (LGBT) people in football, both on the field, in the stands and on the terraces. 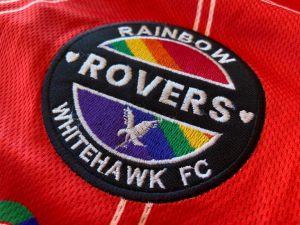 Throughout the week the Hawks will highlight their ongoing campaign to support the LGBTQ+ community with a series of films and images on their social media channels, including their appearance on the recent BT Sport film; ‘Everybody’s Game’.

On Wednesday, February 16, Hawk’s Equality & Diversity Officer and Manager of the club’s LGBTQ+ team Rainbow Rovers Dr. Sophie Cook, will host a very special live podcast featuring key influencers from the LGBTQ+ community, as well as representatives from the football world and key businesses, to discuss the current state of LGBTQ+ inclusion within the sport. 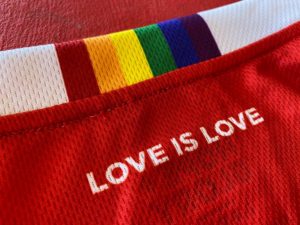 Then on Saturday, February 19, The Hawks will be wearing the club’s affiliated LGBTQ+ team Rainbow Rovers kit, designed by International Turner prize artist David Shrigley OBE, to raise awareness and to support positive inclusion of the LGBTQ+ community in football, as they entertain Faversham Town, kick off 3pm. 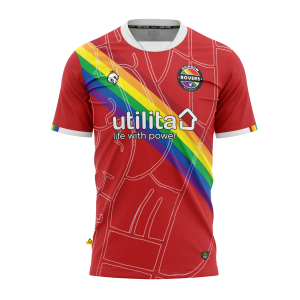 This is the first time in the club’s 77-year history, that the first team have played an official league game in an alternative kit, and this unprecedented gesture has been given full endorsement from the Isthmian League, and league partners PitchingIn. 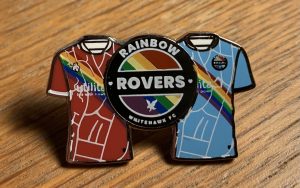 On the day the club will be raising funds for The Rainbow Fund, the central hub for fundraising within the Brighton & Hove LGBTQ+ communities, that distributes grants to local projects that benefit, and make a difference, to the lives of hundreds of individuals within those communities.

“Football versus Homophobia’s month of action has given us the opportunity to showcase the amazing work that the people within the club are doing to address an important issue within football, and on behalf of the club I am very proud that we are part of an incredible movement for change. I’d also like to thank The Isthmian League for their incredible support to make this happen.”

“We’re hugely grateful to Whitehawk FC for their ongoing support for the campaign and their year-round support for LGBT+ people in football and the wider community. We always enjoy the creativity Whitehawk FC brings to their work on LGBT+ inclusion and wearing the Rainbow Rovers kit is a great example of this”

“Equality, diversity and inclusion run through the veins of Whitehawk FC. It is woven into the songs that the Ultras sing on the terraces, it informs every decision that we, as a club, make about our future. Unfortunately there are still some in the world who carry negativity in their hearts rather than love, spreading prejudice and hate. In this match, in our messaging, in wearing the kit of Rainbow Rovers, we are sending the message clear and proud that hate has no place at Whitehawk FC or within the beautiful game. As the fans sing “Homophobia, we say no. We’re Whitehawk FC…Where Football’s for all.”

For Club Sponsors Utilita, Bill Bullen, Founder and CEO of Utilita Energy, a major supporter of football at all levels: “Our team here at Utilita consider ourselves to be extremely lucky to be working with Whitehawk FC – a club that takes every given opportunity to make history for inclusion in football. The league’s decision, and the agreement of other stakeholders, to allow the team to play in their loud and proud Rainbow Rovers strip says it all – the beautiful game is one for all to enjoy.” 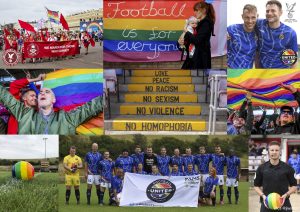 The Hawk’s incredible fan support, ‘The Ultras’ will be out in force to support the day, and there will be a number of speakers during the half-time interval, to support and endorse the campaign. Tickets for this very special league game are £10 adult, £5 Students, Concessions and the NHS, and under 10’s free (accompanied by an adult)

Tickets are £10 Adult, £5 Concessions, Students, The NHS, Children under 10 (accompanied by an adult) free. For tickets to the game click HERE