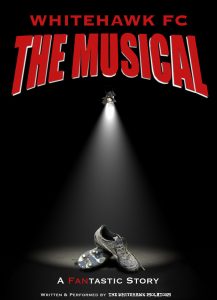 With no football at Whitehawk FC’s TerraPura Ground since October 2020, some Hawks fans decided that the only thing to do to while away the time, is to write a Musical, based on fan’s experiences of life at Brighton’s Premier Non-League Football Club.

Whitehawk FC – The Musical; A Fan-Tastic Story, tells the tale of a little boy, a football club, and a journey of discovery. Guided by his sister, the boy reluctantly goes to his first football match, only to fall in love with the atmosphere, the colourful characters and the welcome that comes with watching the Non-League game.

The story is fictional, but based on real experiences that many people have on their first visit a Hawks game, and the musical joyfully echoes the Club’s stance on diversity, tolerance and inclusion.

This musical is the brainchild of The Whitehawk Isolators, Ollie Learmonth and Dick Langford, two Whitehawk supporters who connected remotely during the first lockdown, and have created several songs for the club whilst self-isolating. They teamed up with fellow fans Eve Plumridge and Simon ‘Odds N’ Evens’,  and all four have been instrumental in developing the narrative, the musical numbers, the acting performances and visual designs. Everyone associated with this project is a regular Whitehawk FC fan, and some form part of the ‘Whitehawk Ultras’, the Hawk’s core fanbase and champions of the Club’s ethos.

The job of holding the musical pieces together was placed in the hands of the two main protagonists; Hawks Ultra Eve Plumridge and 13 year-old Woody Learmonth, the son of Isolator Ollie. 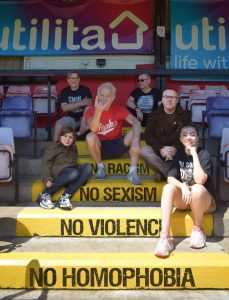 Whitehawk Isolator Ollie explains: “Our intention was to create something entertaining and a little out of the ordinary for the fans, not just at Whitehawk but all supporters that have been starved of any football action over the last year or so. We hope that this Musical spreads the Club’s message of inclusion to other people who may not ordinarily know what supporting Whitehawk Football Club is all about”.

He added; ”As a Hawks fan, I’ve got used to hearing the fantastical and the unexpected on matchdays, but when Dick, my fellow Isolator, suggested we start writing a musical – I must admit I thought he was joking. When it dawned on me that he wasn’t, it felt like I had briefly fallen into a Spinal Tap sketch!” 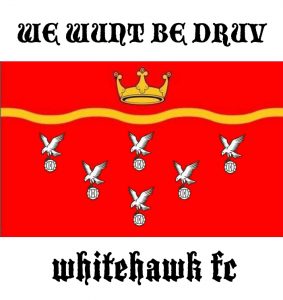 “The idea was so preposterous and so ambitious, plus so outside my comfort zone, that I stumbled to see how we could pull it off.  But as we had somehow got away with the other projects we had done (and we were still in lockdown limbo) I tentatively stepped onboard!” 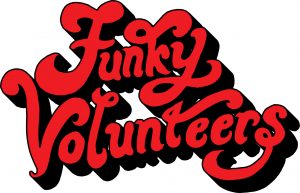 Whitehawk FC Chairman Andy Schofield is delighted with the results. He said, “For everyone starved of watching non-league football over the past few months it’s been difficult. Our fans have been magnificent in pulling together throughout the pandemic.  Whether it’s for lockdown quizzes, fundraising to help the club stay afloat or volunteering to put the ground back together for the new season. What Ollie, Dick and the cast have achieved is amazing. We thank them and all our fans for their dedication to the club.”

To listen to The Musical in full click HERE

The Musical will have it’s first public airing at Whitehawk FC’s Community Day next Saturday (June 26), where Hawks Fans take on Guernsey FC’s fans, in a ‘Welcome back’ to the East Brighton community, and in aid of The Whitehawk Foodbank and The British Heart Foundation.  For information and tickets for the ‘Pay What You Want’ game visit www.whitehawkfc.com  and click on ‘Tickets’

For Interviews and further information on The Musical contact Kevin Miller on 07833 736234 kevin.miller@whtehawkfc.com