Hawks fans Ollie Learmonth and Dick Langford, who before lockdown had never met at a home game, have released a single that has been adopted by the club as their official 75th Anniversary anthem. 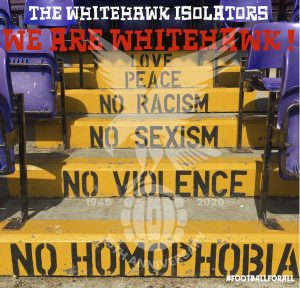 ‘We Are Whitehawk!’ by the Whitehawk Isolators was released earlier this week on the Bandcamp music channel, and has already gained a cult following amongst fans.

Created via e-mail, file sharing and many takes, the musical layers, backing track and lyrics were slowly constructed during the Covid 19 lockdown restrictions, and was sent to Hawks Head of Commercial & Marketing Kevin Miller, who picks up the story.

“Dick and Ollie are regulars at the TerraPura Ground, and are part of the Whitehawk Ultras family. One day during lockdown I received a whatsApp message from Ollie, simply saying, “Have a listen to this! Now, as many who work in football will tell you, fans who create songs about their football club are very passionate, and although most of them are valiant efforts, they wouldn’t bother Simon Cowell. This one, however, was very different. So much so that after hearing it I immediately contacted Ollie and said “We should release this!”

With the help of Hawks Members Secretary, experienced media & music industry player and Whitehawk Ultra Simon Stevens, the four of them devised a plan, designed a cover, and the song was released at half time during the Hawk’s virtual pre-season friendly with Raith Rovers on-line last week.

Lead singer of the Whitehawk Isolators Ollie said, “Singing songs is a massive part of the Whitehawk FC fan experience, and it surprised me that we don’t  really have our own. I didn’t actively go out to write the song but when the chorus idea came to me I was amazed how quickly it came together. When Dick gave the song his endorsement, I was blown away, and he offered to put a backing track together!”

He added: “This was all done remotely. I’m not sure Dick and I had even spoken to each other before!  It was a great moment when I listened to the finished track, and I hope all the Whitehawk Ultras love it as much as I do. It was for them and for us.”

Musician, Producer and fellow Hawks fan Dick Said: “I was surprised to get a message from Ollie with a sketch of a song. I didn’t know him at the time and wasn’t sure how he knew I was a musician.  It’s not often it happens like this, but I heard the song in my head and started to work on the backing track straight away. Ollie then sent me the rest of the lyrics and between us we put together a track Ollie could sing to.”

He added; “I’ve thoroughly enjoyed being part of this, but more importantly I really feel part of Whitehawk FC now. They have been part of my life for 5 years but it’s been a fairly solitary existence as I went to matches by myself and only ever spoke to the guy who sat behind me in the stand.  This period of lockdown has given me a chance to finally develop relationships with other fans and I have to thank Ollie for bringing me in.”

Simon Stevens said, “We love the anthem. We can’t wait to sing it in the Din End and hear it on the tannoy. I’ve worked with some of the greats including Primal Scream and Chemical Brothers but the Whitehawk Isolators knock them out of the park to be honest. I just can’t wait for the world tour!”

The Whitehawk Isolators, ‘We Are Whitehawk!” is available to download NOW