Whitehawk Football Club have been shortlisted for a major award at this years’ Sussex Sports Awards, held at the Hilton Brighton Metropole on November 22.

The Sussex Sports Awards is one of the most prestigious evenings in the Sussex sporting calendar, celebrating Sussex sport, physical activity and the phenomenal heroines and heroes who have contributed at all levels, across all walks of life.

The Hawks have been nominated in the prestigious ‘Club Of The Year’ category – a recognition of the club’s community projects over the past year.

Hosted by Active Sussex, the black-tie event, in its 17th year, famous faces from across the world of sport will be in attendance for the star-studded ceremony, hosted by GB sporting legend Kriss Akabusi, alongside revered BBC radio presenter Danny Pike, for his tenth consecutive year.

Head of Commercial and partner in the Hawks in the Community project, Kevin Miller said,

“To be shortlisted for this prestigious award is phenomenal, and a testament to the incredible time and effort that so many people have given to create some incredible   moments over the past year. We are part of an amazing community, and as a grassroots football club we have a duty to do what we can to help and inspire our region. This nomination is a recognition that we’re on the right track.”

“Football is a powerful tool to unite communities, it draws people of all backgrounds together in a common cause. Going to a football match can inspire, improve mental health, give people a renewed sense of purpose and create more contented lives. Grassroots football in this country relies on volunteers who have a passion for their club and community, and we are connecting with our community and our city”

The Club of the Year category is a public vote, with closing date/ time just one hour before the announcement on the night.

The shortlisted finalists with Whitehawk are Westerleigh Judokwai and Worthing Town Football Club.

OUR COMMUNITY STORY OVER THE PAST YEAR… 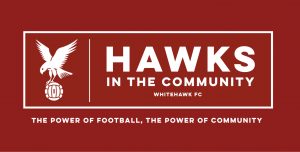 Football United : At Pride we hosted a match between ex-Premier League players and an LGBTQ+ Xl, kit designed by International artist David Shrigley. Fans For Diversity, Kick it Out and Football v Homophobia supported the game. The player-manager was transgender writer and campaigner Sophie Cook. Players came from LGBT inclusive clubs such as Stonewall FC, London Titans and Soho FC. The game was one of the biggest mixed gender matches ever played and gained national media attention. Plans are underway for Football United 2 in 2020.

FEAR//LESS: Developed by young people at Brighton & Hove YMCA to challenge and inspire society’s idea of masculinity and break down barriers that keep people from asking for help. Young local artists used ideas around identity, body image and relationships, as well as health and well-being to display an interactive exhibition of their work in the player’s lounge, which was viewed on matchdays in February 2019.

Hawks In The Community: Hawks In The Community is a partnership with The Award-Winning Crew Club, local business, University of Brighton  & Your League TV to use football as a focus for community solidarity.  ‘Hawks Heroes’ is a project for men on the Whitehawk Estate aged 30+ who were unfit through inactivity. A 10-week programme focused on health & well-being through football, and culminated in a match at Whitehawk FC. Crew Club Hawks FC is an U13 side drawn entirely from the area who were Champions last season. The team is now part of a three-year programme to expand football for boys and girls in Whitehawk by creating a pathway from U7 to U16.

Hawks’ Heroes. Adam’s Story: Adam Butterworth was a Hawks Hero. Just after the first training session, Adam went to the doctors feeling tired, to be told he had anaemia. He required six emergency blood transfusions. Then a tumour was found, and he was eventually diagnosed with bowel cancer. Adam played in the final Heroes match and is now on a programme of chemotherapy and on the road to recovery. Before Hawks Heroes, Adam had no idea he was ill.

Whitehawk Legends: As part of the Brighton & Hove Ageing Well Festival, ‘Whitehawk Legends’ is aimed at men over 50+ who may have lost their immediate family network and are socially isolated. Whitehawk Legends receive the offer of  free transport to and from games and a talk with the club’s historian on past club memories. The aim is for men to re-connect with their peers, make new friends, have a renewed sense of purpose and make new connections with the club. We hope to see some becoming volunteers at the ground on matchdays.

We provided practical experience to students studying construction and graphic design at Brighton MET College. Students re-painted our clubhouse, built an extension to our changing room and designed matchday posters for our league matches. We also used our links with employers to enable key staff such as a local head chef to visit the college and demonstrate industry standard skills to students.

Whitehawk Foodbank: The Whitehawk Ultras, our activist fans, have a tradition of support for the local foodbank. The foodbank is heavily used, and our fans organise regular collections at matches.