For 19 home league matches this season, prices have been frozen at £150 for adults and £75 for concessions. Once again children under 10 will be allowed in free of charge, so long as they’re accompanied by a paying adult.

The club will also recognise the amazing dedication from all workers from the NHS during the pandemic, and will offer the concession price to all NHS staff upon receipt of their NHS card.

“We’re all looking forward to returning to a full season, but we recognise that the landscape has changed. We simply couldn’t charge last seasons ticket holders again, not only because a lot of them have been instrumental in getting the ground ready for the new term, but also because there were only seven home games during the whole of 2020, and four of those were from the previous season!”

“We also wanted to recognise the incredible work that our friends at the NHS have undertaken during this pandemic, and we hope that many staff can find the time to visit the ground on matchday’s, and look forward to welcoming them.”

He added: “I believe that there will be a huge renaissance in the non-league game this season — communities are coming together and the experience of going to a non-league game is so different to top-flight football. There’s a freedom at this level that you just can’t replicate in the higher leagues, and the game is just a part of the day.”

“I urge fans young and old, regulars and first-timers, to get back to supporting your local club, we look forward to welcoming everyone to what we hope will be a very successful — and complete! — new football season.” 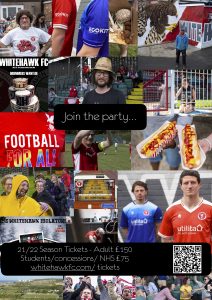