Whitehawk Football Club return to the TerraPura Ground on June 26, five days after the proposed easing of Covid restrictions and for the first time since October last year, with a very special Community Day, that will see Hawks fans take on Guernsey Football Club’s fans, in a charity game in aid of the British Heart Foundation and The Whitehawk Foodbank.

The ‘pay what you want’ event is a ‘thank you’ from the two Isthmian League south east clubs to their amazing communities. The day will also see the Hawk’s first team take a training session on the pitch before the game, and cheer on the fans from the terraces in a ‘role reversal’ on the day!

There will be stands and stalls, live music, face painting and yoga sessions, half-time entertainment, and much more! The match will be live streamed via the Hawks TV YouTube channel – WhitehawkFC TV courtesy of Your Instant Replay. Doors will open at 12pm, with the match kicking off at 3pm.

Allowing for Covid protocols, it is hoped that the club will also be able to show the two European Championship matches on TV in the clubhouse in the evening. 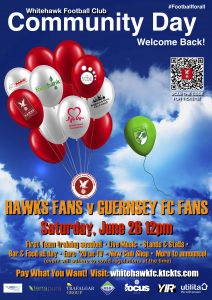 There will be 24 players per team, and will feature one or two ‘ringers’ in Hawks Manager and former keeper Ross Standen, and first team coach Stuart Tuck.  For Whitehawk Fans, men or women, who wish to take part (16+ only),  it’s £20 to play, and each player will get to keep the shirt that they play in, have their photo and bio in the match programme, enjoy a post match meal, and take part in a training session with Hawks Management team!

During lockdown, the two clubs have been working together on a number of fan initiatives, including a virtual match played out on twitter: Click Here to raise funds for The Whitehawk Foodbank and the Guernsey Mind Charity, and although the Channel Islands club were unable to fulfil their Isthmian League south east fixtures last season, the bond between the two clubs grew stronger.

Hawks Head of Commercial & Marketing Kevin Miller explains; “The Hawks travelled to The Footes Lane Stadium in January 2020 for the first time in the club’s history. The 100 or so fans who travelled to the Island had a superb time, and were made to feel very welcome by their hosts. We kept the relationship going, culminating in this amazing event.”

He added; “Both clubs wanted to say a huge thank you to their fans, who have stuck with us through tough times for us all. We wanted to celebrate our amazing communities by inviting them to meet up — possibly for the first time for a lot of people — and to create a wonderful celebration of grassroots community football”.

Hawks Chairman Andy Schofield said; “Whitehawk FC started just over 75 years ago as a community football club serving Whitehawk and Manor Farm. Many of these residents played for the club, including our current manager Ross Standen. Our fans and the community have stuck by the club during difficult times and it would be great to see friends and new faces down at the ground for Community Day on June 26.”

Guernsey FC Director Nigel Braybrook said;  “We are delighted to be involved. The event continues the strong relationship between the clubs. We cannot wait to meet up with friends old and new whilst having some fun and raising money for two very good causes.”

Tickets are available on-line: www.whitehawkfc.ktckts.com and will be also available on the day. Both clubs will adhere to any set Covid protocols at the time.