Twitter virtual match with Guernsey on Saturday a big hit with fans!

Whitehawk FC and Guernsey FC were due to play a Bet Victor Isthmian League game on Saturday (28th) – the home club’s Community Day. Instead, they played out a ‘Virtual game’ as live on Twitter, and set up a JustGiving page to raise funds for The Whitehawk Foodbank and The Guernsey Mind Charity.

The script written by Whitehawk’s Commercial & Marketing Manager Kevin Miller and Theatre Producer and Whitehawk fan Paul Hodson, was set up to create an ‘as live’ experience for both sets of fans, and an amicable 6-6 draw (albeit a thriller of a game!) was the outcome.

Kevin Miller said after the game;

“There’s a lot of people to thank for putting this together, Paul (Hodson) who was great in setting out the initial layout, and creating a lot of the plot twists (!), Hawks Head of Media Adam Hart who sat in front of his computer at home and delivered the whole thing, The Chairman Mark Le Tissier, and Nic Legg Communications Director from Guernsey Football Club who were great sports and were 100% up for it, Dan D’urso our virtual ref (aided by dad Andy!), David Shrigley who designed a unique piece of artwork for the goal celebrations, and Hawks Ultra Stephen Wrench and Hawks Chairman Andy Schofield who handled the press & PR!”

He added; “The current situation in the world means that at times, we all need a distraction, however small, and for a couple of hours on Saturday we created just that, and a huge thank you must go to all those who took part on-line and who donated!”

There’s still time to donate! Simply visit; https://www.justgiving.com/crowdfunding/whitehawk-ultras and pledge what you can!

For a match review we hand you over to Hawks fan and regular Hawks Ultra’s scribe, Stephen Wrench, who describes the action!

Hawks 6, Guernsey 6; A rip roaring, goal packed, edge of the seat thriller so hyper-real that no-one could possibly have made it up, the Ultras in fine voice with several notable solo turns as – from five minutes in – the goals tested the strength of the hallowed Enclosed Ground nets and virtually shredded the nerves of even the most many-seasoned of Ultras, each on this unique occasion in their own personal enclosed Enclosed Ground. Goals, there were more than a few, too many to mention – Abdulla hat trick? Of course. Lucas superwinging?

Without a doubt – and yet, and yet, the biggest goal was beyond the mere playing of this match – https://www.justgiving.com/crowdfunding/whitehawk-ultras – true to the lobster-clad, drum-beating, flag waving, singing/chanting/bellowing – “Abdulla!” – beating heart of what it means to be a Whitehawk fan, and it is this heart, soul and spirit that wins the coveted Hope For The Future Of The Match. 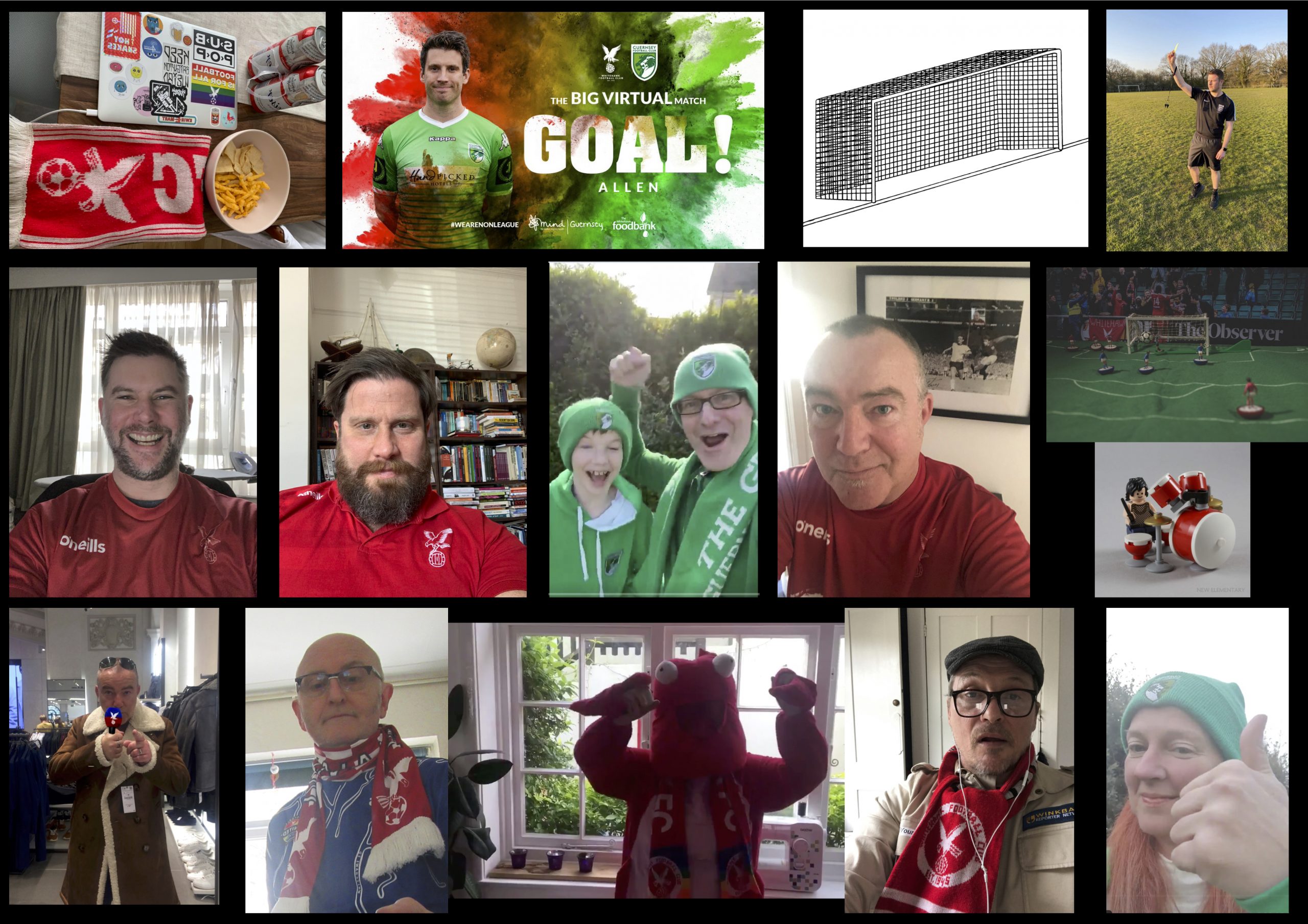 Fans from both sides got together to donate funds for two desperate charities...