Your League TV captures the highs and lows of an inspirational Community Project.

Whitehawk FC’s ‘Hawks TV’ co-sponsor, and Official Hawks In the Community TV Channel, Your League TV, have released ‘Hawks Heroes, The Documentary’, a film that tells the story of the ten-week Hawks In The Community programme, that brought together twenty overweight and unfit men over thirty from the Whitehawk Estate, and turned them into a football team.

The programme, funded by Innovation Foundation organisation Nesta, and delivered by HITC partners the Crew Club, VYD CIC and Pleece & Co, was launched in the summer and culminated with a full 90-minute football match in August at Hawk’s TerraPura Ground, against local Brighton team Montpelier Villa. 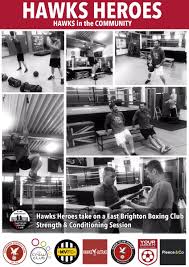 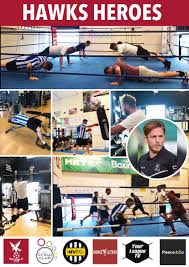 The film charts the progress of the boys as they are put through their paces by Uefa A license coach Kevin Green, and the trials and tribulations that occur as they slowly start to regain fitness and the camaraderie that comes with working in a team.

The film also highlights one of the Hawks Heroes, Adam Butterworth who, upon feeling unwell from the first session, was persuaded to visit the local GP by his new teammates, and subsequently found out that he was severely anaemic. Upon further diagnosis it emerged that he had bowel cancer, but despite long sessions of chemotherapy, carried on the programme, and played in the final match. 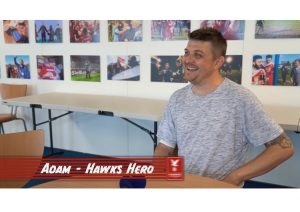 Before the programme, Adam had no idea he was even ill…

The group lost a collective eight stone in weight, changed their diets and followed a healthier regime, renewed a passion for fitness, and have subsequently formed a formal team, and are now looking to join a league…

“Hawks’ Heroes was such an inspiring programme, and has made a real difference to so many people within the estate. This brilliant film put together by Your League TV’s Simon Stevens, himself a ‘Whitehawker’, captures the pathway from start to finish, and charts the progress of the boys as they start to get fit, feel better and inspire others”

He added, “The Hawks in The Community project is just one of the ways in which Whitehawk Football Club are working with communities in Brighton to instil a sense of togetherness; all ages, all genders, all faiths, all abilities and all disabilities. Grassroots football clubs need to being totally immersed within its community, and we are trying very hard to create a very special football club, both on and off the pitch” .

You can watch the documentary here: https://www.yourleague.tv 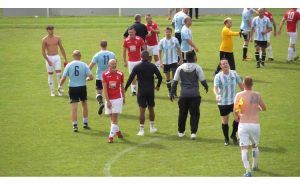 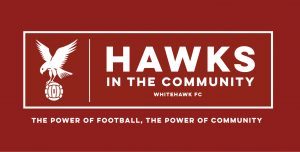 Whitehawk Football Club have been shortlisted for TWO  major awards!

The Club have been shortlisted in the ‘Club of The Year’ category at The Sussex Sports Awards, is held at the Hilton Brighton Metropole on November 22.  The Sussex Sports Awards is one of the most prestigious evenings in the Sussex sporting calendar, celebrating Sussex sport, physical activity and the phenomenal heroines and heroes who have contributed at all levels, across all walks of life.  It’s a public vote, with the result announced  on the night.

To register your vote visit www.ssa19.club

The Hawks have also been shortlisted for the National Game Community Award at the 2019 Football Supporters Association Awards, held in London on December 16.

The award is voted for by a judging panel, and nominated along with the Hawks are Bath FC, Boston United, Dagenham and Redbridge, Dulwich Hamlet and Stockport County.

The Awards are one of the most prestigious in the football calendar, and includes the whole of the football world, from Premier League, Womens Super League, media, fans and grassroots football.

For more information on Hawks In the Community, or to enquire about community projects within the Brighton area,  contact Kevin Miller on 07833 736234 or e-mail kevin.miller@whitehawkfc.com