The Hawks meet East Grinstead Town today at East Brighton Park, in a fixture that has 70-years of history.

In 1950 the Hawks andEast Grinstead‘A’, the Wasps reserves, were in Brighton & Hove District League Division 1. The two clubs first met on 2nd September 1950 at East Brighton Park in a 2-2 draw. Hawks won the return fixture 1-0 in April 1951 at West Street, just four days after winning the Sussex Senior Cup, when we beat Eastbourne Town 1-0 at Woodside Road, Worthing. We remain the only side from the Brighton & Hove District League ever to have won the Senior Cup. The programme from that game at West Street (below) is the oldest one in the club’s archive. 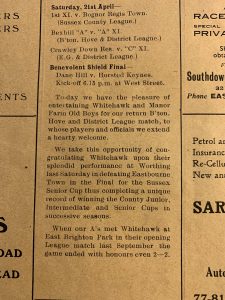 In 52-53 the Hawks joined the Sussex County League and were then competing with East Grinstead’s first team. Our historic first ever home game in the Sussex County League on 6th September 1952 was against The Wasps. Played behind tarpaulin on the open park pitches by Wilson Avenue, the game ended in a 2-2 draw. Hawks first ever County League game the week before, had been a 4-1 away win at Crawley Town. East Grinstead first played on the current Enclosed Ground in January 1955, when they were defeated 6-0. Hawks goalscorers were Harry Sargent, Ronnie Bliss, Ron Pavey (2), Bob Mealyea and Syd Towner. Hawks left back in that game was a young Derek Tharme, who was signed by Spurs the following season, still the only Whitehawk player to be transferred directly to a First Division/Premier League side.

Throughout the fifties the Hawks had an amazing record against the Wasps, remaining undefeated in league or cup games until 1961. The Hawks recorded some big wins. 8-1 at home in April 1954 was followed up by a 8-2 win at West Street in the October of the following season. The Wasps conceded six on their next two league visits.

When the Wasps finally got the better of the Hawks after nearly ten years, the 2-0 victory in 1961 made headline news in the Argus. The match report noted the three penalties in the game, with only one scored, by Wasps centre-half McCoy. Centre-forward Read grabbed the Wasps other goal. Mickey Robins, who played in the first ever meeting in 1950, was back in goal for the Hawks. We went on that season to win the County League title for the first time, as well as being the first side for over 50 years to do the double by also winning the Sussex Senior Cup. 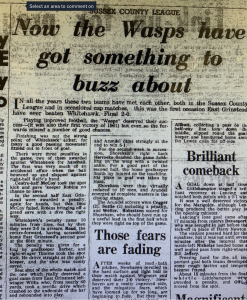 The two sides met regularly in the decades that followed, including our first ever tie in the FA Vase in 1974, after that competition replaced the FA Amateur Cup. The Wasps won the encounter 2-0 at East Court. The Wasps knocked the Hawks out of the FA Vase again in 1987, winning 2-1 at the Enclosed Ground. In 2009 the Hawks defeated the Wasps 5-0 away in a Vase first round tie on our way to a semi-final defeat. This match is notable for the first goal in a Hawks shirt by our current player James Fraser. Josh Jones (2), Matt Geard and Wes Tate were the other scorers.

The Wasps last played at East Brighton Park in February 2020 when an Ahmed Abdulla goal settled a tight game.