The club are sad to announce that club vice-president Dave Etheridge (above left, with Gerry Fell and shirt sponsor Steve Foster in 1984) has passed away.

Dave was the club’s general manager from 1983-85, during which time he was responsible for organising a £30,000 fundraising campaign to build the current club house. It  had originally been a pre-fabricted structure once used as a temporary bank in Haywards Heath. The current brick building was erected around the original, which was then pulled down from the inside.

Dave ran an electric shop in Lewes Road. He was appointed a vice-president in 1991, in recognition of his contribution to the club.

The club send their condolences to Dave’s family and friends. 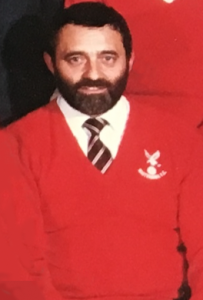