Corinthian travel to Brighton on Saturday to play a first ever league game at East Brighton Park.

Earlier in the season the Hawks won 4-0 at Gay Dawn Farm. The two clubs have met twice previously in cup football, in quick succession in the nineties when Corinthian were a Kent League team. Hawks were managed by Butch Reeves on both occasions.

Corinthian’s only previous visit to the Enclosed Ground was in 1995 when the two sides sides were drawn against each other in the 2nd round of the FA Vase, with the Hawks winning 3-1. Simon Pierce (2) and Mark Gransden got the goals. The main thing remembered about this match seems to have been the card happy referee Mr Wright, who also ordered the floodlights to be on at 3pm for the start of the game. Hawks had already beaten Littlehampton Town in the 1st round, but lost 2-0 at home to Banstead Athletic in the 3rd.

In his programme notes for the 95 game, editor Ken Taylor paid tribute to the hospitality offered by Corinthian and their founding Chairman RJ Billings (Senior) in the fixture two years earlier. The Billings family are still  responsible for the club, which was originally set up on their farm to provide sports facilitates for youth players. RJ Billings (Junior) is the Current Chairman and James Billings appears in the current Corinthian first team as a defender. His brother Sam Billings plays cricket for Kent and recently made his England test debut in the final match of the Ashes tour last month. 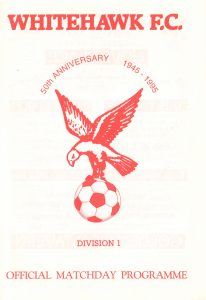 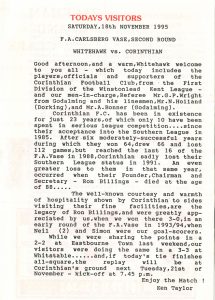 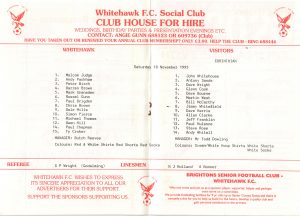 Hawks 1993 team v Corinthian at Gay Dawn Farm in our first ever meeting: