Powerful conversations from players on their own Mental Health issues made for an inspirational evening with Danny Mills.

The culmination of a superb month of events with Whitehawk FC and Dulwich Hamlet FC, ‘Shoutout’, An Evening With Danny Mills and Friends’ saw around 70 people enjoy very special zoom call last Sunday.

Fans also welcomed Simone Pound from The PFA, and Peter Augustine from the FA to the evening.

This was the fifth of five events throughout February, aimed to raise funds for MIND, and for Hawks and Hamlet fans to come together and support mental health initiatives. The evening quickly became an incredible night of emotion, as Kye Trott from the Mental Health team Peoples FC, opened the evening and gave an emotional account of his story and how he set up the club. 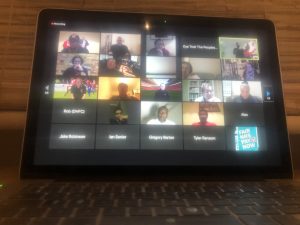 The audience were then given a bit of a ‘workout’(!), as Hamlet physio and CEO of Specifeye Health and Wellbeing Tyrone Cassius gave the assembled audience a bit of a light-routine…

With a Q&A, a raffle and an auction, as well as new friendships made, the final Shoutout event is one that everyone who attended will remember for a long time.

Danny himself, was overwhelmed.

“What a humbling and inspirational night! To have so many people join me was surreal. It was an absolute pleasure to do it with two great clubs in Whitehawk FC and Dulwich Hamlet FC . I would personally like to thank Simone Pound from the PFA and Peter Augustine from the FA for attending and of course my legendary former teammates Osei. Jake, Serge and Jordan.”

He added,“From stories around mental health, to players sharing their own experiences this was certainly a night that will live long in the memory. I want to thank everyone involved in helping organise this event as it took a while but we got there in the end1 We have now managed to raise over £2000 which is just unbelievable. This event shows we can all come together for a common cause and be open and honest about our own journeys.

‘Please remember you can still donate until the end of the month! Let’s keep the work going!’

“It was Incredible! Thanks to the players who spoke so openly about the difficulties they’ve been through at darker times in their careers. Fans don’t generally see that side of things. I’m sure it left us all with lots to think about.”

Look out for more #shoutout initiatives in the coming weeks.

There is still time to donate to the campaign, simply visit: https://www.justgiving.com/crowdfunding/shoutout