Today’s FA Trophy clash will bring back memories for older Hawks fans of our only previous visit to Tooting & Mitcham United, then of the Isthmian Premier League, for an FA Cup 3rd qualifying tie in October 1983.

The Hawks had already disposed of Horndean, Whistable Town and Walton & Hersham, approaching the tie with a realistic chance of eventual progress for the first time ever to the first round proper. The Hawks team featured ex-Albion stars Gary Williams, Glenn Geard (above) and Gerry Fell. Mark Dunk, father of Albion and England defender Lewis Dunk was a formidable presence in midfield.

Hawks luck ran out at the famous old Sandy Lane ground in a game ruined by strong winds. The writing was on the wall as early as the 14th minute, when sub Dave Harding was hospitalised after a metal lampshade fell off the stand and hit him on the back of the head while he was sitting on the bench – an incident Secretary John Rosenblatt remembers as if it was yesterday.

Two goals from Butch Dunn in between one from Ronnie Murrock settled the tie 3-0. Carlton Fairweather, who joined Wimbledon at the end of the season played on the left wing for Tooting.

Hawks, under the current AFC Southwick manager Sammy Donnelly, would go on to win the County League title, losing only twice in the league all season and famously winning their last 16 games.

The only other meeting of the two teams was in October 1968 in the old FA Amateur Cup. Tooting & Mitcham winning 1-0 at the Enclosed Ground.

(above) Butch Dunn scores for Tooting in 1983 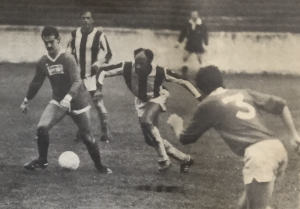 (above) Butch Dunn does it again