Hawks In The CommunityNews
Superb Free Comedy Night in aid of the Whitehawk Foodbank at Christmas
Whitehawk Football Club are hosting a very special night at the Hawk’s Clubhouse on Wednesday December 4, from 7:00pm. (First act 8:00pm)
A night of stand-up comedy, music and performance, in aid of the Whitehawk Foodbank, and in partnership with Hawks In The Community, The Whitehawk Ultras and Your League TV.
Stand Up For Whitehawk is a FREE event (admission by donation to the Foodbank), starring legendary Punk Poet and stand-up comedian Attilla the Stockbroker, Eddy Brimson, writer, broadcaster. life-long Watford and Hemel-Hempstead fan and one of the funniest stand-ups on the circuit, as well as special guests JJ Waller and Dr. Sophie Cook, player manager of Rainbow Rovers LGBTQ football team, writer and motivational speaker. 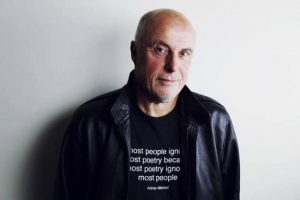 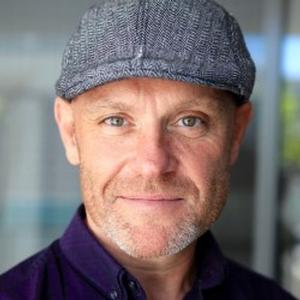 (Attilla The Stockbroker, Eddy Brimson, Sophie Cook, JJ Waller)
Hawk’s Bar and cafe will be open, and there will be one or two special guests on the night.
The whole event has been sponsored by West Montenegrin non-league football club F.K. Real Kakrc – whose representatives recently visited England for their 1,000th competitive game, the European Championship Qualifier between the two nations at Wembley.

Bozida Borozan – Fan Club President of ‘The Goats’ said;
(Translated by Club Secretary Pajo Bakić)
“F.K. Real Kakrc are happy to be sponsoring the Stand Up for Whitehawk night to aid The Whitehawk Foodbank. We are pleased to help support such an innovating and welcoming football club. We pride ourselves on representing our town and the community of Kakrc so we feel tied to the values that the Whitehawk show. We have always wanted to contribute towards the club, having been long distance admirers of the Hawks and the work that the club does in the city of Whitehawk. We are very excited to meet with the fans of the Hawks, to see the sights of Whitehawk, and of course to come to the Enclosed Ground and see the famous slopings of the pitch.”
Hawk’s Head of Commercial Kevin Miller said;
“We’re delighted to be able to host such a superb night of comedy and much more at Christmas. We are, as a community, always mindful of the plight of others, and always happy to help wherever we can, to make the lives of some of our community just that little bit better over the festive period.”
He added; “I’d also like to thank all the artists and entertainers performing on the night, and a very special ‘Hvala Vam’ to our friends at FK Real Kakrc – we hope that you enjoy our hospitality and get to see our famous slopings!”
Tickets are FREE with a donation to the Whitehawk Foodbank, and will be sold on a first come first served basis.
To reserve your free ticket visit:
https://www.ticketsignite.com/event/2114/stand-up-for-whitehawk 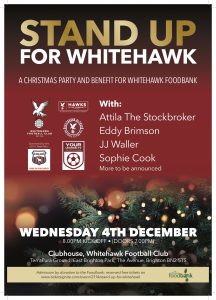