The Hawks first played Burgess Hill in 1949, when Whitehawk & Manor Farm Old Boys won 2-0 at Burgess Hill United in Division 2 of the Brighton, Hove & District League on the opening game of the season. This league was at Intermediate level, one below County League. Hawks won the home game 10-0 in April 1950, going on to a league and cup double, while playing in front of home crowds of 1000+ on the park pitches by Wilson Avenue. (above: 1950 team pic after winning the Intermediate Cup). Burgess Hill United finished bottom and resigned from the league at the end of that season, to join the mid-Sussex League and then the County League in 1958 as Burgess Hill.

We next played Burgess Hill in the 1967-68 season after suffering our first ever relegation to Sussex County League 2. We won the first meeting 6-2 away from home on our way to the Division 2 title. We met again in 71-72, when the team now known as Burgess Hill Town were promoted to County 1. The Hillians often got the better of the Hawks in the 70s, winning the County League under Ken Carter in 1976 as a newly promoted side and inflicting an opening day 4-0 defeat on the Hawks. The following season saw a league double for the Hillians who also knocked us out of the RUR Cup, with the Hawks relegated for only the second time in their history.

Above: The late, great Ken Carter at Whitehawk in 2018, won league titles with both clubs

Normal service was resumed in 1981-82 with another league double for the Hillians until it was the Hawks turn for dominance as they stormed to a county league title under Sammy Donnelly in 1984. Burgess Hill were hammered 6-0 at Leylands Park, with Kevin Crooks scoring four and beaten 3-0 at the Enclosed Ground with Crooks once more on target. Dale Mills scored a hat trick against the Hillians in a 3-0 home win in 1987.

Youth player Darren Freeman scored his first ever league goal for the Hawks in a 3-1 defeat at Leylands Park in 1991. In 1996 we suffered our heaviest ever defeat to Burgess Hill, going down 6-1 in the away fixture. Simon Pierce, who appeared for both clubs, scored the solitary goal but gained revenge the following season with a hat-trick in a 4-2 home win. Burgess Hill put four past Ross Standen in a 4-1 win at the Enclosed Ground in 1997 and went one better in 1998 in a 5-0 home win. Matt Ades was in goal by the time the Hillians beat us 5-1 at Leylands Park in 2001. Our last defeat to Burgess Hill was in April 2003, 1-0 at Leylands Park, to finish runners up and a massive 21 points behind the Hillians, who were promoted to the Southern League.

The two sides didn’t meet again until 2010 in Ryman South, when goals from Jerahl Hughes (2), Joe Gatting, Sam Fisk, Ben Godfrey and Josh Jones for the newly promoted Hawks, secured a thumping 6-0 home win. The return fixture finished 2-2. In 11-12, Hawks won both games 2-0 with James Fraser and Sam Gargan scoring one a piece in each fixture. Both players have appeared for the Hawks and the Hillians.

Lucas Rodrigues scored the winner and his first goal for the Hawks in a 3-2 extra time victory in the Sussex Senior Cup 2nd round at Burgess Hill in 2016. Rodrigues, who also wore the green of Burgess Hill on loan, scored his third league goal for the Hawks when the two sides next met in a 4-2 win at Leylands Park in 2018 in the Isthmian League Premier Division. Henry Muggeridge, Brannon O’Neill and James Fraser were also on target. Hawks won the home game 4-1, with Rodrigues, Nathan Pinney (2) and Muggeridge the scorers, but both sides would go on to be relegated at the end of the season. The Hillians last visit to East Brighton Park was in November 2019 when Fintan Walsh and Alfie Rogers’ only ever goal for the club secured a 2-0 win for the Hawks. Rogers then went on to play for the Hillians.

More players have played for both Hawks and Burgess Hill Town than any other club in our history, including eight of the current squads and two members of the management. The full list includes both legendary and obscure names going back to the 1950s. Stuart Tuck has the distinction of being the only one to have played for and then coached both sides. Ken Carter, who local football expert Kevin Keehan rates as the best Sussex non-league manager ever, has the distinction of building title winning teams at both clubs. Ian Chapman just missed out on doing the same, coming second twice with the Hawks before winning Isthmian League South with the Hillians in 14-15. Current Hillians manager Jay Lovett played alongside Ross Standen for the Hawks in 2009. Jim Collins, Hawks Chairman in 2014, previously held the same role at Burgess Hill in the 90s. Connor Tighe has had three spells at both clubs.

Played for both: (current players in bold) 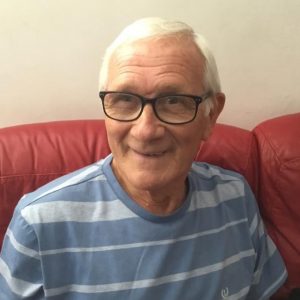 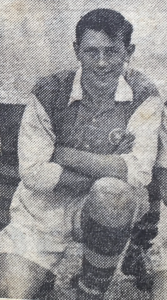 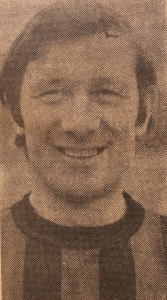 (Above: Derek Tharme. The only player ever to leave Whitehawk for a Premier League/First Division club, was signed by Spurs in 1956. He later played for Southend United, Hastings United and Burgess Hill Town)