Two of the country’s most progressive Non-League Football Clubs launch their 2022/23 campaigns with a very special pre-season match at the Hawks’ Enclosed Ground on Saturday, July 9, from 1:30pm.

During the UK-wide lockdown period of February 2021, Dulwich Hamlet of the Vanarama National League South and Whitehawk of the Pitching In Isthmian League South East joined forces to raise over £3,000 with a series of ‘virtual’ events for Mental Health charities Mind in Brighton & Hove and Lambeth & Southwark. The culmination was a proposed match between the two clubs, and 17 months later, the two sides have finally managed to arrange it! 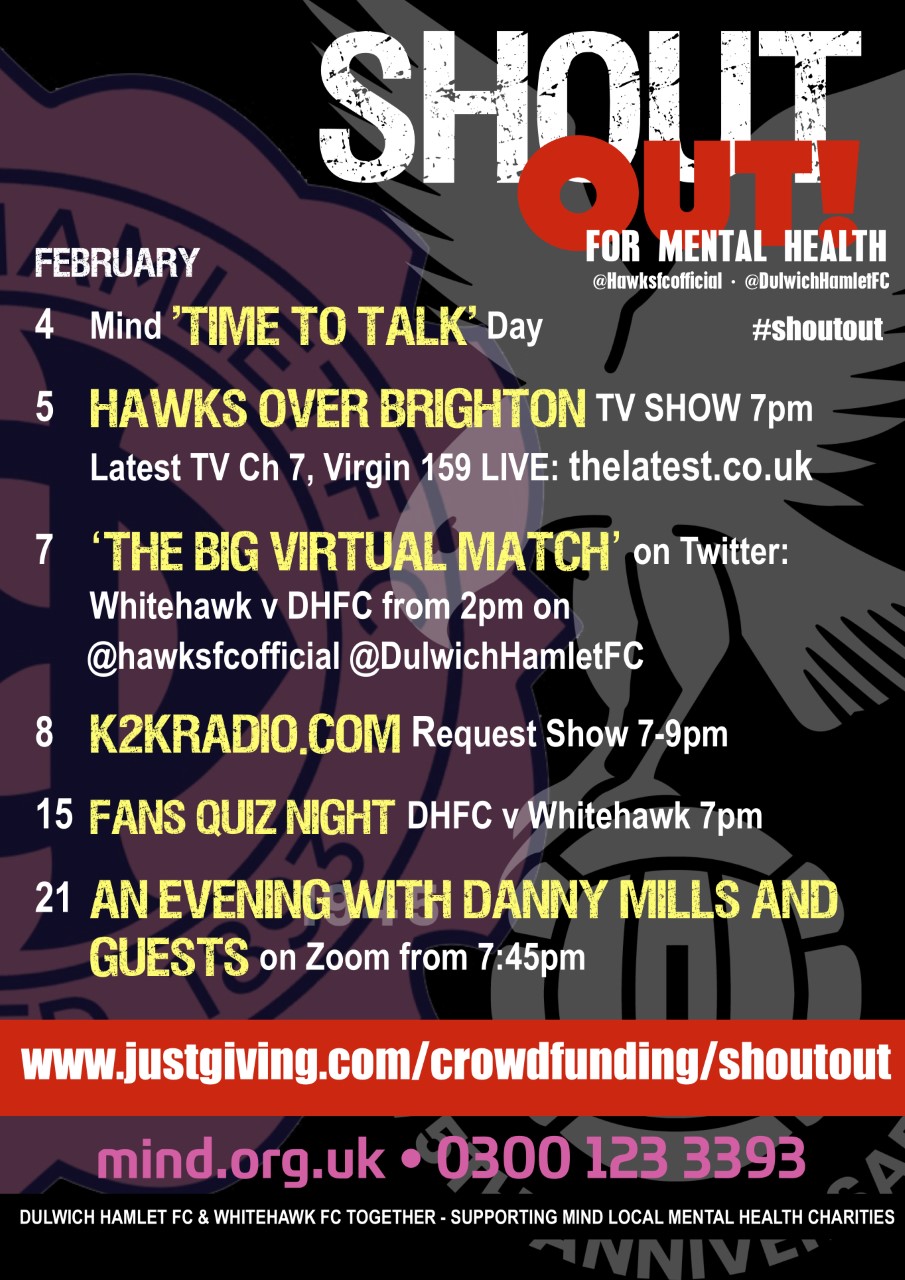 Spearheaded by current Hamlet striker Danny Mills, who spent five years at Whitehawk during one of the most successful periods in the club’s history, the original campaign (to the right) included a TV show on local Brighton channel Latest TV, a ‘Virtual’ match played out on Twitter, a radio request show on local London station K2K, a fans quiz night, and an ‘evening with’ zoom event featuring Danny, fans from both sides, and some very special guests.

Using the hashtag #SHOUTOUT, ‘SHOUT OUT FOR MENTAL HEALTH’ is a campaign to raise funds via a JustGiving page: https://www.justgiving.com/crowdfunding/dulwichhamlet-footballclub?utm_term=7Bg673mRb, and to encourage anyone currently feeling anxious or alone to talk to someone; To call a friend, a work colleague or a family member, and to reassure them that they are not alone.

Mental Health issues, particularly amongst young men, have risen sharply during and post pandemic. Research commissioned by Mind in partnership with the English Football League compares polling data from YouGov with the same survey from 2009. The survey reveals that while some progress has been made, young men especially, feel worried or low more regularly than ten years ago and are consequently twice as likely to feel suicidal.

The July 9 game, kick off 3pm will feature live music, half-time entertainment, raffles and fundraising activites, and is supported by Health & Wellbeing Company Specifeye, Football Support Group Our Game, Nuffield Health, Energy Company Utilita’s Community Programme and Fans For Diversity. It is hoped that this will become an annual event, with the next game at Dulwich’s home ground, Champion Hill.

All tickets are £5 and available on-line: whitehawkfc.ktckts.com or on the gate on the day.

Campaign Spokesperson and Dulwich Hamlet Striker Danny Mills said; “This has been such a hard couple of years for everyone, and people’s mental health has taken a knock in one way or another. Losing jobs, struggling through the cost of living crisis, and losing loved ones. This campaign is to let them know that help is out there and that they are not alone; to check in with their friends and family to make sure they’re okay and that help is available. There is nothing wrong with not being okay. We’re all in this together. We all need to talk.”

He added; “I’m so pleased that we’ve been able to arrange this game. It seems like only yesterday that we were sitting around a ‘virtual table’ coming up with ideas about what we were going to do for the campaign, and a year and a half later it’s surreal that we are able to actually play! A massive thank you to all those that have played their part in creating this special day; As players we can’t wait to get going, and it’’ll be really special to have Whitehawk and Dulwich fans all together!” 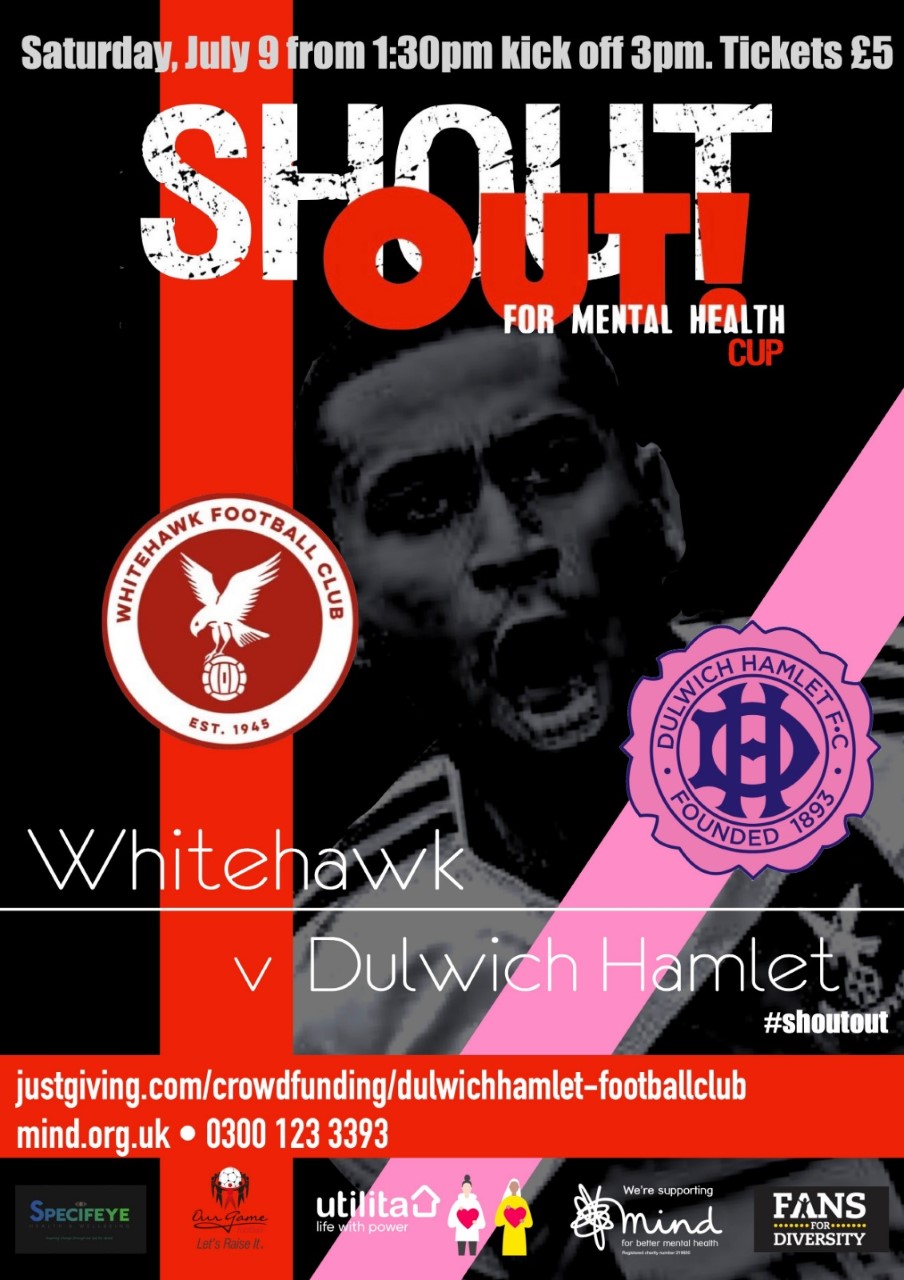 Alastair Smith-Agbaje, CEO Lambeth and Southwark Mind said,“We are thrilled and excited to be working in partnership with two great football clubs, in addition to our Mind team in Brighton. Our synergy will create visibility, awareness and support to many within our local communities, who struggle with mental health and wellbeing.”

He added; “We saw that during last year’s Shout Out campaign some amazing opportunities to raise funding for people to not only learn about mental health but to get some support. This match will be a great opportunity to do the same, it will help to take away the stigma and allow people to really recognise that its ok to have mental health challenges, and more importantly recognise that there is support at hand. We are very proud to be supporting this game — it’s going to be a wonderful occasion and on behalf of my team I hope that will be a huge success!”

Whitehawk FC Chairman Andy Schofield said,“It is such a pleasure to be again working with our friends from Dulwich Hamlet to highlight mental health. We are two very progressive non-league football clubs, who see our influence in the community going beyond just playing football. There has been an increasing awareness that mental and physical health go hand in hand, especially since lockdown, which means more people are now talking about the issues they face. If the Shout Out for Mental Health campaign helps in a small way, it will have made a very worthwhile contribution to the debate.”

DHFC Chairman Ben Clasper said, “This game is everything that is great about non-league football. Two clubs coming together to raise awareness of a really important cause. It’s been driven by both clubs in partnership with Danny at the forefront. Danny is using his platform and influence to spread a message that could save someone’s life. #ShoutOut isn’t just about this game, it’s a message for all of us to remember throughout the season.” 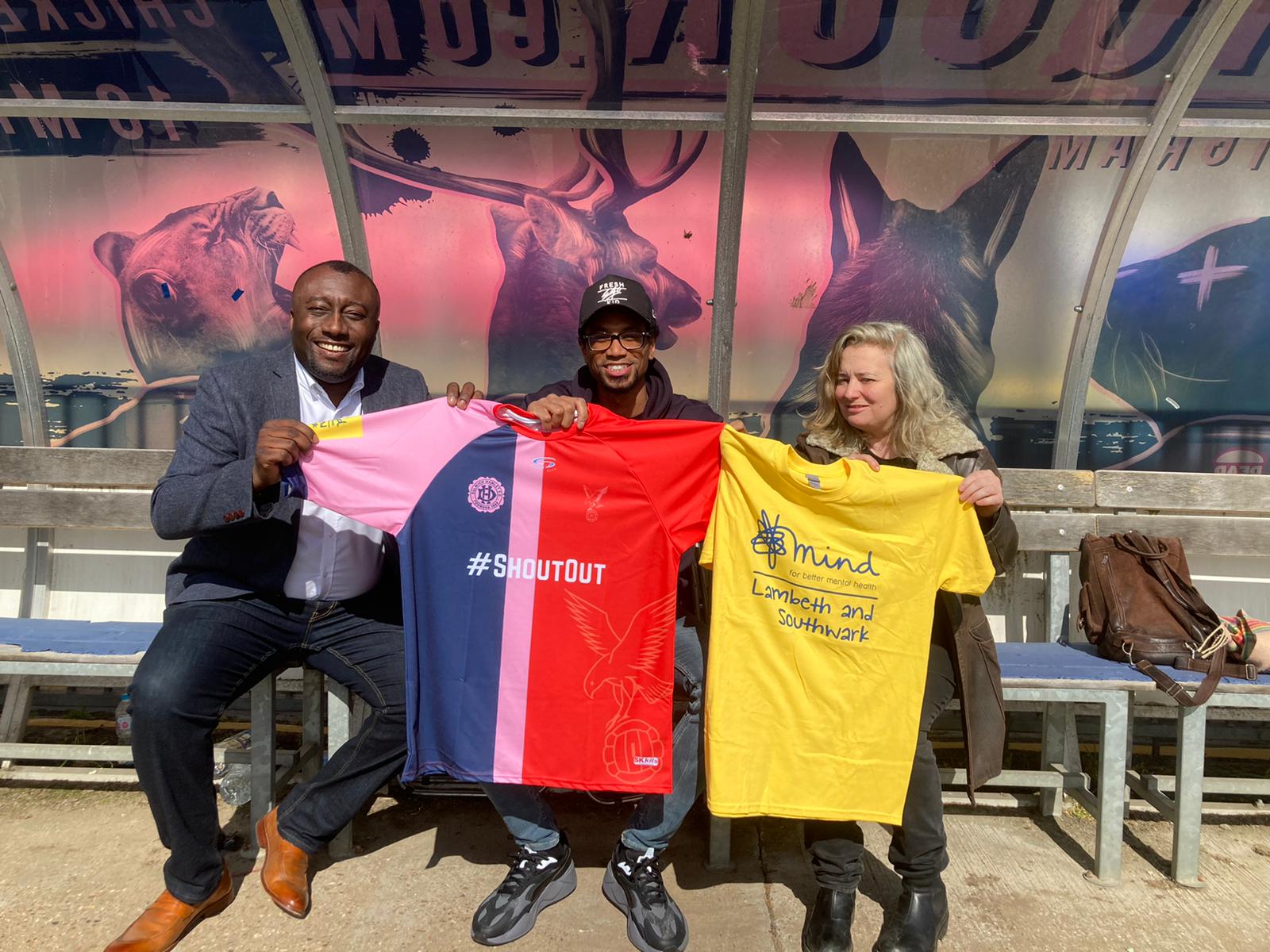